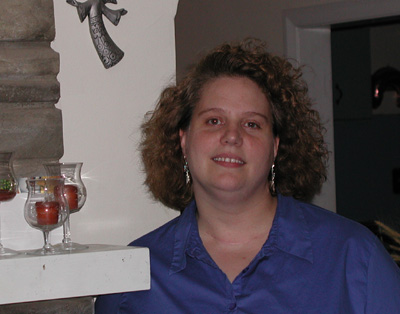 Education: I graduated from Reading High School in 1986. I attended the University of Maine and Kutztown University (majoring in Chemistry), but did not get a degree.

Occupation: I currently work for a large investment company in Valley Forge, PA.

How I became interested in ghost hunting: I've been interested in the paranormal, especially ghosts, pretty much since I was old enough to hold an interest. My mother was very interested in anything macabre, and I was raised on Edgar Allan Poe, Dr. Shock (anyone else out there old enough to remember him?), and Creature Double Feature. As a teenager, I wanted to someday become a parapsychologist, but eventually realized that you can't support yourself that way. So, I settled for spending vacations in haunted bed & breakfasts, like The Myrtles in Louisiana, and hoped that I would someday witness an apparition.
Two years ago, after gaining access to the internet for the first time, I started searching for ghost websites. I was amazed at what a found…there were actually people out there that spent their free time in haunted locations trying to obtain scientific proof of the existence of ghosts! I knew immediately that I wanted to be a part of it. I applied for the PGHAs first overnight seminar at Fort Mifflin in Philly, and was extremely excited when I was chosen. That night, I learned about what real paranormal investigators do, and the equipment they used.
Not long after that, I became a member of the Lehigh Valley Ghosthunter's Society (LVGHS). After participating in several independent and LVGHS investigations, I decided that I wanted to branch out on my own, so that I wasn't held to investigating in one certain geographical area. Around that time, I met Shonda Addington from just outside of Columbus, Ohio, and we started traveling together to conduct investigations. In November of 2001, I met Robert Hall at a Point Lookout lighthouse open house. He and I became friends, and I brought up the idea of starting a new club. He liked the idea, and said he would help me build a website. He was an absolute lifesaver since I had very little computer experience, and a paranormal club is nothing without a good website to showcase their results! In early June of 2002, we launched the site. The rest is history.

Joint investigations: I have also participated in formal and informal investigations with other groups including the LVGHS, PGHA, PIRA, AGS, and Gettysburg Spirit Watchers.

Feel free to e-mail me at Hillary@paranormalinvestigators.com